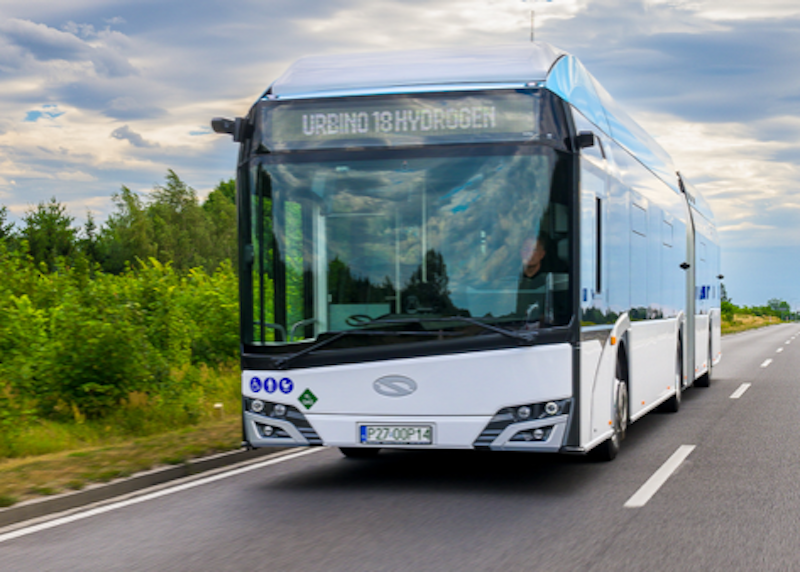 Solaris has unveiled its Urbino 18 hydrogen bus. The Urbino 18 hydrogen bus is now Solaris's second hydrogen bus in its zero-emission offering. As with the shorter version, the main energy source in this vehicle is hydrogen. With this 18-metre model, the manufacturer is responding to the growing market for vehicles of this type. This also reflects the commitment of Solaris when it comes to the development of zero-emission solutions and its desire to provide its clients with the widest possible range of environmentally friendly vehicles.
The heart of the Urbino 18 hydrogen bus is a cutting-edge fuel cell that acts as a miniature hydrogen power plant. Hydrogen is transformed by the fuel cell into electricity which is then transferred to the driveline. Solaris's new vehicle doesn't feature a conventional engine compartment as it has been equipped with a modular drive system. The space thus saved allowed the bus maker to increase the vehicle's passenger capacity. What is more, by eliminating the engine compartment more space on the roof has been created, where composite light hydrogen tanks with a total capacity of 51.2 kg have been mounted. The use of a modular drive also facilitates servicing as its main components are now accessible from floor level. For further information see the IDTechEx report on Electric, Hybrid and Fuel Cell Buses 2021-2040.
The electricity from the hydrogen fuel cell in this articulated Solaris bus is transferred directly to the driveline. Solaris batteries with a capacity of around 60 kWh, mounted in the vehicle serve as an auxiliary power source, used, for example, during acceleration as well as a storage for recovered energy. Full refuelling of the vehicle takes around 20 minutes.
Thanks to the hydrogen technology applied and an increased number of new, light hydrogen tanks, the brand-new bus will perform excellently on longer routes. It will be able to cover about 350 km on a single refill in various weather conditions. Depending on the configuration, the bus will be able to carry up to 140 passengers. The latest model can be type-approved as a class II vehicle, which makes it possible to deploy it on inter-city routes.
The first deliveries of the 18-metre articulated vehicle will be possible as early as the second quarter of 2023. Clients will be offered the possibility of customising the bus to cater for their individual preferences.
Urbino 18 hydrogen bus is the second hydrogen vehicle in the manufacturer's range. The 12-metre version of the Solaris Urbino hydrogen bus was launched in 2019. Since then, nearly 100 hydrogen buses have already been delivered to customers in Italy, Germany, the Netherlands, Sweden and Poland. New deliveries to clients in Spain, France, the Czech Republic and Slovakia, amongst other countries, will start soon.
Source and top image: Solaris