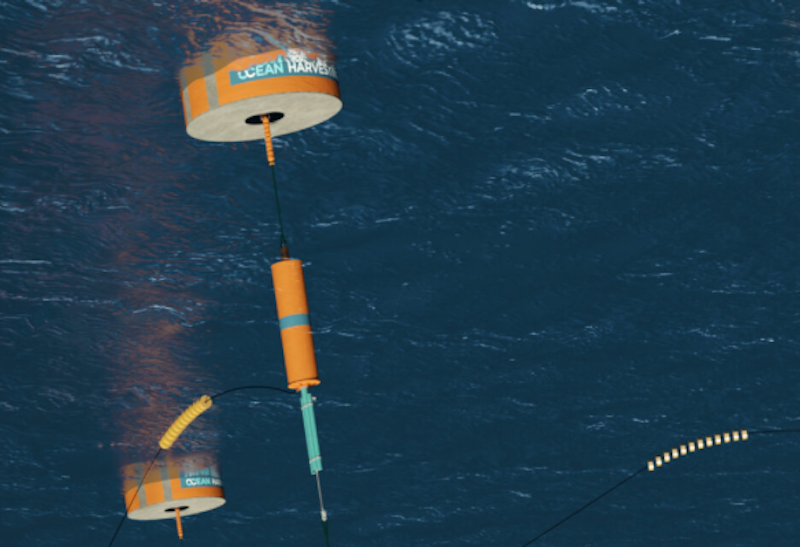 Ocean Harvesting has successfully completed the testing of a prototype in scale 1:10 of the power take-off (PTO) and the control system for the wave energy converter InfinityWEC. The design, build and testing in the rig was part of a project co-financed by the Swedish Energy Agency.
To obtain a realistic load on the machinery, a scaled hydrodynamic model of a full-size wave energy converter (WEC) was used in combination with the physical PTO prototype and a real-time control system in a hardware-in-the-loop (HIL) configuration. A control system has been developed for both the PTO and the HIL rig, which in combination with the physical representation of the PTO, with all essential functionality included, demonstrates that the technology works as intended.
The project validated that all critical parts of the PTO could be built with standard components. The full-scale design aims to use standard components with high availability from suppliers, to minimize risks, shorten development time and reduce the costs of the final product.
The control system developed for the project is based on a modern software architecture using OOP (object-oriented programming) and TDD (test-driven development). It is based on Beckhoff PLCs and TwinCAT software, which is a suitable and cost-effective solution both for HIL testing and for large-scale offshore deployment of wave energy converters in wave farms. The developed software will be transferred to and further developed in the full-scale development phases of InfinityWEC. The test rig will have continued use as a development platform to evaluate advanced reactive control strategies and design principles, to further refine InfinityWEC's capability to extract maximum power from every individual wave.
The next development stage for Ocean Harvesting is a sea trial of InfinityWEC at scale 1:3, a project planned to start in November 2022. The sea trial will demonstrate the InfinityWEC technology, control system and its performance in a real sea environment, a critical step towards the validation stage of the system at full scale and commercialization of the technology.
About Wave Power
The estimated global theoretical potential of wave power1 exceeds the global use of electricity and is available in coastal areas where most of the population lives. Wave power produces electricity more consistently and at different times compared to wind & solar power and therefore contributes to offset intermittency, reducing the total cost of carbon-free electricity. Wave power furthermore needs only half the amount of energy storage to balance the power production to a constant output throughout the whole year compared to wind power, further reducing the total cost of energy. Wave power will be an important part of the future renewable energy mix, contributing both to lower cost of energy and a more stable energy system.
About Ocean Harvesting and InfinityWEC
Ocean Harvesting is a privately held company with offices in Karlskrona and Gothenburg, Sweden. After years of research within the wave energy sector, the company started in 2017 to develop the InfinityWEC concept, a point absorber type wave energy converter.
InfinityWEC is:
What makes InfinityWEC competitive is the advanced power take-off system, using a combination of ball screw actuators and a hydraulic pre-tension system (proven technologies) to provide instant force control with high efficiency. This enables the use of reactive force control to maximize the energy output in every individual wave. A unique survival function holds the buoy submerged through the crest of large waves, protecting the system from excessive load and enabling power to be produced also in the most severe wave conditions. InfinityWEC is engineered for sustainable large-scale production and effective logistics. The power take-off uses proven subsystems. InfinityWEC's prime mover (buoy), is made of concrete casted with locally sourced materials at the installation site in a process common in civil engineering, eliminating long transportation of materials. A special high strength and sustainable concrete mix is being developed in collaboration with RISE Research Institutes of Sweden, enabling a prime mover with equivalent weight to a conventional steel hull, at 1/4 of the cost and 1/3 of the CO2 footprint. The excellent performance and reliability, combined with a modular design where all critical parts are easily constructed, transported, installed and maintained, make InfinityWEC a very competitive solution for the future global energy market. The market for InfinityWEC ranges from utility-scale wave farms to off-grid power supply, for island communities, green hydrogen production and other offshore industrial installations such as oil & gas and aquaculture. Read more: oceanharvesting.com
For further information on energy harvesting research and for a full list of market research reports from IDTechEx, please visit www.IDTechEx.com