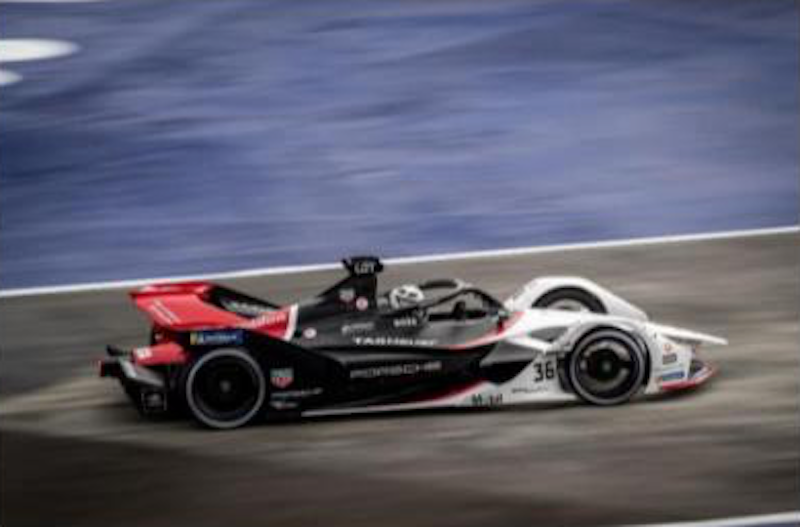 Henkel through its well-known Loctite brand is partnering with Porsche in the ABB FIA Formula E World Championship, the only all-electric and most sustainable motorsport series. With a strong legacy of performance, innovation, reliability and sustainability, Loctite has become the official Adhesives Partner for the TAG Heuer Porsche Formula E Team, offering premium professional products and extensive technical expertise on the Porsche 99X Electric - the company's first all-electric racing car.
The ABB FIA Formula E World Championship actively promotes electric mobility and innovative mobility solutions that contribute to reducing air pollution and fighting climate change around the globe. Both Henkel and Porsche have set themselves the goal to drive progress towards a sustainable future.
Porsche Motorsport is constantly improving the Porsche 99X Electric in regards of efficiency and reliability to compete in the most competitive racing series in the world - the ABB FIA Formula E World Championship. Henkel supplies adhesive solutions for many applications, both in the Porsche development workshops and at the racetracks. For further information see the IDTechEx report on Electric Motors for Electric Vehicles 2022-2032.
As part of the partnership the TAG Heuer Porsche Formula E Team uses a wide range of Loctite products, including a number of high-performance epoxy adhesives, retaining compounds, gap-filling adhesives, threadlockers (medium and high strength), structural adhesives, thread sealants and instant adhesives. The deployment of these products ensures complete mechanical reliability for a host of key applications, which extend from suspension bearings, gearbox housing parts and powertrain bolts, through to steering wheel components, O-rings and cables. Porsche test rigs for engines and gearboxes also benefit from the high-performance Loctite solutions.
"We are proud to partner with the TAG Heuer Porsche Formula E Team in the ABB FIA Formula E World Championship," says Joerg von Ameln, Corporate Vice President General Manufacturing & Maintenance at Henkel Adhesives Technologies. "Together we aim to pave the way to what is clearly going to be the future of motorsport. And this is an obvious match because, just like us, Porsche enters competitions to win!"
"The partnership perfectly illustrates our shared brand values," adds Eric Saunders, Vice President Marketing for General Manufacturing and Maintenance at Henkel Adhesive Technologies. "This is an ideal platform on which we can emphasize the Loctite commitment to developing pioneering products based on real-world expertise whose safety and sustainability credentials are second to none."
"In order to be successful in such a highly competitive racing series as the ABB FIA Formula E World Championship, we need strong partners who share our commitment and vision for the future of motorsports. We are delighted to welcome Henkel as our reliable strong partner. The Loctite core philosophy and products stand for innovation and sustainability which therefore makes it the perfect match for Porsche," explains Thomas Laudenbach, Vice President Porsche Motorsport.
This partnership between Henkel, one of the global leading suppliers of adhesives, sealants and functional coatings, and Porsche, one of the most iconic leaders in motorsport, both with histories stretching back to the 1950s, is the continuation of a long, trusted collaboration.
The very first highlight of the partnership was already celebrated at the Mexico-City E-Prix on February 12th: Starting from pole position on the Autodromo Hermanos Rodriguez circuit in the No. 94 Porsche 99X Electric, Pascal Wehrlein (GER) clinched the first victory for Porsche in the ABB FIA Formula E World Championship. His teammate André Lotterer (GER) finished second in the No. 36 car, making the perfect triumph for the Stuttgart sports car manufacturer at round three of this season's Formula E. By clinching the top two podium positions in Mexico, the TAG Heuer Porsche Formula E Team progresses up the team rankings to third place. In the drivers' standings, Pascal Wehrlein sits third, tied for points with André Lotterer in fourth.
On April 9th and 10th, the ABB FIA Formula E World Championship returned to Europe. The doubleheader event for the 4th and 5th rounds will take place in a temporary street circuit located in the EUR district of Rome. The TAG Heuer Porsche Formula E Team will once again join the race against its competitors, aiming to repeat the successful results in Mexico.
About Henkel
Henkel operates globally with a well-balanced and diversified portfolio. The company holds leading positions with its three business units in both industrial and consumer businesses thanks to strong brands, innovations and technologies. Henkel Adhesive Technologies is one of the global leader in the adhesives market - across all industry segments worldwide. In its Laundry & Home Care and Beauty Care businesses, Henkel holds leading positions in many markets and categories around the world. Founded in 1876, Henkel looks back on more than 140 years of success. In 2021, Henkel reported sales of more than 20 billion euros. The company employs about 53,000 people globally - a passionate and highly diverse team, united by a strong company culture, a common purpose, and shared values. As a recognized leader in sustainability, Henkel holds top positions in many international indices and rankings. Henkel's preferred shares are listed in the German stock index DAX. For more information, please visit www.henkel.com

About Porsche in Formula E
With the Porsche 99X Electric, Porsche returned to open-wheel single-seater racing in 2019 after more than 30 years and celebrated a successful debut scoring second place at the season-opener in Saudi Arabia's Diriyah in the ABB Formula E season 6. The fully electric racing car sporting the Weissach-developed Porsche E Performance Powertrain also serves as a development platform for the sports car manufacturer's fully electric production models. Energy management and efficiency are important factors of success in Formula E and in the development of production cars. For the 2021/2022 season, the 99X Electric has a maximum output of 250 kW in qualification mode and 220 kW (last season 200 kW) in normal race mode. Attack Mode boosts the output to 250 kW (last season 235 kW). Maximum recuperation is 250 kW; the usable battery capacity is 52 Kilowatt-hours. The TAG Heuer Porsche Formula E Team tackles its third season running the Porsche 99X Electric. More information can be found under: media.porsche.com/formula-e
Source and top image: PR Max