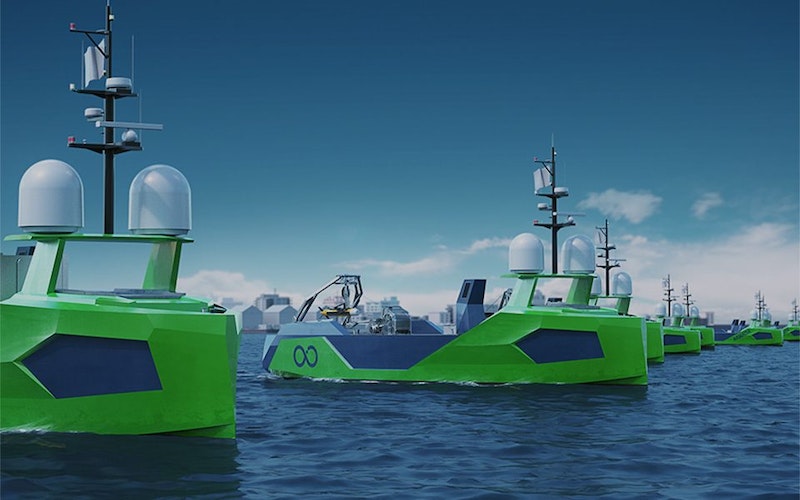 Ocean Infinity, the marine robotics company is pleased to announce it is a winner of The Clean Maritime Demonstration Competition, enabling the Company and its partners to build a Marine Propulsion Test facility, with an integrated Ammonia Marine Propulsion System (AMPS). The test facility will demonstrate clean-fuelled technology eventually capable of powering Ocean Infinity's Armada fleet, using an innovative ammonia based fuel cell system.
The Clean Maritime Demonstration Competition is funded by the Department for Transport, with Innovate UK acting as delivery partner. With Ocean Infinity acting as lead partner, the company is combining forces with UK-leading experts in clean fuel cell technology; maritime logistics; deployment and operation of remote and autonomous technology; and the development of operational regulations. The project team consists of an industry leading operator, Oxford Green Innotech, the University of Oxford and the University of Southampton's Marine and Maritime Institute.
Currently, most vessels use Green House Gas intensive internal combustion power systems. Directly targeting key elements of the UK Government's 2050 Clean Maritime Plan, Ocean Infinity and its partners are introducing innovative new technologies and techniques for clean vessel propulsion, expecting to make a meaningful contributing towards the UK's net-zero greenhouse gas commitment. For further information see the IDTechEx report on Electric Leisure & Sea-going Boats and Ships 2021-2040.
This project, due to deliver a zero-emissions marine propulsion system, is crucial for developing a robust understanding and thus optimisation of an AMPS, suitable for integration into Ocean Infinity's Armada fleet and beyond.
Dan Hook, Ocean Infinity's Chief Technology Officer, said "Winning The Clean Maritime Demonstration Competition is a significant step forward in the delivery of a zero emissions marine propulsion system. Working with the UK's leading experts, we are driving forward a ground-breaking ammonia based fuel cell system, which will not only make the Armada fleet the cleanest in the world, but also has the potential to revolutionise marine propulsion systems. I would like to extend our thanks to the Department for Transport, and Innovate UK, for instigating the competition and for their financial support of this important programme."
The Marine Propulsion Test facility, with an integrated Ammonia Marine Propulsion System (AMPS) project is part of the Clean Maritime Demonstration Competition, funded by the Department for Transport and delivered in partnership with Innovate UK.
Announced in March 2020, and part of the Prime Minister's Ten Point Plan to position the UK at the forefront of green shipbuilding and maritime technology, the Clean Maritime Demonstration Competition is a £20m investment from government alongside a further c.£10mfrom industry to reduce emissions from the maritime sector. The programme is supporting 55 projects across the UK, including projects in Scotland, Northern Ireland and from the South West to the North East of England. As set out in the Clean Maritime Plan (2019), Government funding has been used to support early stage research relating to clean maritime. The programme will be used to support the research, design and development of zero emission technology and infrastructure solutions for maritime and to accelerate decarbonisation in the sector.
Ocean Infinity is a marine robotics company that deploys autonomous technologies at scale to capture ocean data and deliver maritime solutions. The company's mission is to use innovative technology to transform operations at sea, enabling people and the planet to thrive. Ocean Infinity owns and operates the largest fleet of 6000m rated underwater autonomous vehicles in the world. In addition, the company currently has six work class remotely operated vehicles and eight unmanned surface vehicles. The company's uncrewed Armada fleet, which is set to revolutionise the maritime industry, will ensure Ocean Infinity own and operate the most high-tech, green and safe maritime fleet in the world.
Source: Celicourt UK
Top image: Ocean Infinity